If you enjoy the from first principles theme, consider reading the one on containers.

Networking can seem like voodoo; many of us take for granted how data transmits from one computer to the next. Recently, wireguard, has attracted a lot of publicity for it’s inclusion into the Linux kernel & for it’s stated goal of making setting up VPNs simpler.

Behind all the magic, is a very simple premise. Let’s shed some of the complexity and break it down to first principles.

The definition seems simple enough. Bridge two discrete private networks & make them look like they are one.

We will accomplish this task with a tunnel.

I did not include the routers or gateways in the figure.

This is pretty common to what most people might experience with their home setup.

private IP addresses are those that can only be reached from other machines within the subnet.

public IP addresses are those that are broadcasted to neighboring routers and exchanged via the BGP protocol.

The goal of the tunnel will be to join these two distinct subnets into a virtual one; a virtual private network (VPN).

We will then assign two IP addresses within that subnet to the two hosts.

The private network address range is 172.16.0.0/12 according to https://www.arin.net/reference/research/statistics/address_filters/

The first step in setting up our tunnel will be to create a tun network interface device3. A tun device is a kernel virtual network device, they are not backed by a physical device.

Packets sent by the operating system via the tun device are delivered to a user space program which attaches itself to the device. A userspace program may also pass packets into a tun device. In this case the device delivers these packets to the operating-system network stack thus emulating as if it has arrived from an external source.4

tun devices operate at the L3 layer (IP). There is an analogous tap device that operates at the L2 layer (Ethernet).

We then need to assign the new private IP addresses for our new subnet.

Now let’s create a general routing rule so that anything destined for that subnet routes to the desired tun device.

We make sure to test the route with an IP address not present on either machine, otherwise it will match to the lo (loopback) device.

Great! We have setup some network interfaces and routing rules, but what is actually transmitting the packets to give the illusion of a single network?

The heart to setting up VPN is the software bridging the packets across the two networks. In our case, we will be using a userspace program and the tun device; however wireguard has included this capability within the kernel itself.

Since this will be a toy example, I’ve named the program lametun. It will be a single golang file with minimal dependencies to demonstrate how simple it is. 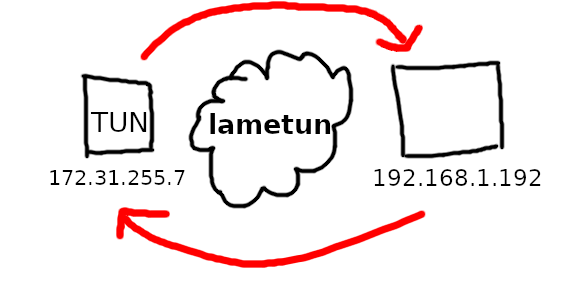 lametun will read all incoming packets at a particular UDP port (i.e. 1234) and write it to the tun device.

lametun will read all outgoing packets from the tun device and write it back out the physical network device.

Both the server & laptop will run lametun on UDP port 1234, listening on the physical network device.

Make sure your firewall allows whatever port we are using for lametun. I was using an EC2 host and had to also allow the UDP port through the SecurityGroup as well.

The TUN device however emits raw L3 packets (IP packets), and the IP address of the device is not-routable. Simply copying the packet to the physical device is not enough; it must be routable.

We will encapsulate the packet with a routable IP & UDP header destined for the VPN peer.

UDP is chosen since there is a lot of literature how TCP over TCP is a bad idea; TCP Meltdown.5 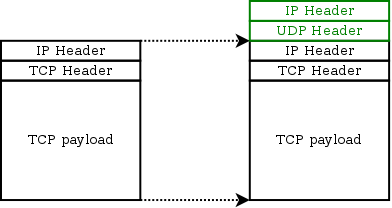 Using encapsulation, we can now have non-routable packets traverse the Internet. Once they arrive at the lametun destination, the inner packet is forwarded onto the tun device to continue routing.

Typically, in order to guarantee delivery across the Internet, network devices restrict the maximum transmission unit (MTU), which is the size of the Ethernet frame, to 1500 bytes.

Although IP protocol supports fragmentation, there is no guarantee that every link along the way does. It’s best to stay within the 1500 byte limit.

Given that we are embedding our transmission protocol within a IP-UDP datagram, we must account for this reserved headroom accordingly or risk breaking the 1500 byte boundary.

A simple demonstration will help.

So we simply need to adjust the MTU on our TUN device accordingly.

I’ve kept the code to a single-file for demonstration purposes but you can also find it on GitHub https://github.com/fzakaria/lametun. It is heavily commented for learning purposes.

I tried to make the code somewhat Go-idiomatic without being too pedantic as a learning exercise. If you feel the code can be improved, please reach out or open a pull-request.

Running the code is quite simple.

In order to simplify the tunneling code & avoid having to solve cases where both machines are behind a NAT, lametun requires that one peer acts as the “server”; it must have a publicly accessible IP.

When a UDP packet arrives to the “server”, it will store the remote address which it will use when sending back encapsulated responses. This is how the server can learn about the NAT address of the laptop.

There are solutions to where both machines are behind a NAT such as using STUN; however it adds quite a bit of complexity.

The inner protocol is unencrypted, which can be a problem if it’s also in cleartext like HTTP. More robust solutions like wireguard, encrypt the encapsulated packet. The equivalent would be to extend lametun such that the UDP payloads are encrypted. That part is straightforward, key management is difficult :)

Consider these remaining gaps homework assignment or now you can use the mature product offerings with a better conceptual understanding and appreciation.

Web friendly version of my resume.

Click here for some personal projects I've worked on.

Click here for the archive of my old blog posts from Wordpress.